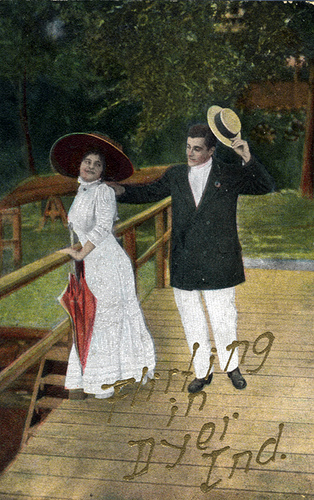 Flirting for mummies – I’m a bit out of my depth
Credit: Shook Photos – Flickr

I was standing at the supermarket checkout poised to pay for a few hurriedly grabbed items that by some miracle would have to turn into tea in the 45 minutes between my son’s athletics and my daughter’s piano lesson.

His voice was deep and throaty: “Madam, would you like my club card points?”

I looked up to find the owner of the voice – a handsome 30-something man in a smart navy suit and aquamarine shirt with eyes to match – looking at me expectantly.  I swallowed hard. I was out of my depth…

Out of my comfort zone

It’d been a while since I’d been addressed by a man of any age who wasn’t related to me or trying to sell me something. It also had genuinely never occurred to me that there might be people on this planet who didn’t find accumulating club card points as deeply thrilling as I did.

I handed over my keys blindly to the stranger, our fingers touching briefly, and he gave it to the cashier who swiped the key fob without question, oblivious to the fact that I was socially way out of my comfort zone.

Had I been chatted up?

Blue eyes flashed a smile and he was gone, leaving me to gather my shopping bags, children and galloping thoughts.

I’m aware that most people – apart from other 40-something mums – will find this tragic, but this little episode stirred something in me, which probably should have been left unstirred.

Had I just been chatted up? Why hadn’t the lovely young man offered his points to the builder at the counter on his other side? Why did he choose me?

My inner voice awoke from her slumber: “Or is it because your strained face and tired clothes suggested that you really needed the points. You were his good deed of the day.”

The truth was it’d been a while since I’d been chatted up. It was a good seven years ago when a quite inebriated man who claimed to have Italian mafia connections, instructed the barman at the village pub to send over a drink. The barman had to repeat it three times before I believed him.

And when an ex-colleague told me over the phone that I was much more beautiful in real life than the photograph on my website, I giggled nervously, even though I knew he was simply trying to tell me subtly that it was not cool to use a photograph of your 20-year-old self when you’re nearly double that age. My inner voice almost wet herself laughing.

It’s not that I’m hankering after an affair or even a free drink (though I might be persuaded on the second one), but a bit of male attention – other than: “What’s for tea?” wouldn’t go amiss.

My encounter had just brought it home to me again that men – other than my husband and sons- had completely disappeared off my radar like a plane falling from the sky.

My wildest fantasies about men– other than the ones involving my husband (and they deserve their own blog post…ha ha) – can be summarised as:  “I really hope those strong hands and muscular arms will be able to fix the washing machine.”

When was the last time I stole a second glance at a passing pair of solid shoulders or solicited a wolf-whistle from even the roughest workman on the street?

Once you’re on the wrong side of 40 and especially if have that weary-eyed mum-of-three look in your eyes and telltale layers around your waist, you’re blanked by the majority of English men over the age of four.

(This is different in Europe, in my experience, where a full-bodied woman past her sell-by date can still raise an appreciative glance. They like their wine older too.)

But perhaps I’d underestimated English men all along. I’d been thinking of things I should have said to Blue Eyes: “What is your club card total?” or “You can swipe my club card again any time. ”  – I’m still working on it.

Meanwhile, I’m thinking of taking some initiative and might just offer to share my points with some poor unsuspecting man on my next shopping trip.

When was the last time someone of the opposite sex tried to chat you up – or even just noticed you? How did you react?

19 thoughts on “Do you still know how to flirt?”