Since I had children my culinary excursions have been dominated by the kind of restaurant that offers finger food or plastic cutlery in garish surroundings with a kindergarten-ambiance.

It’s fair to say that my standards have been significantly lowered since the days when I earned a decent salary and had a semblance of a life.

Out of my depth 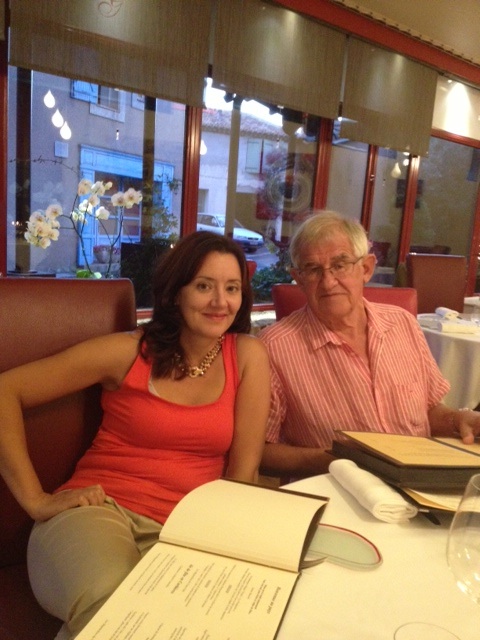 My dad, Deon, and I on his 70th birthday

So, when my dad offered to treat us with a meal at a 3-starred Michelin restaurant to celebrate his 70th birthday, I was over the moon, but out of my depth.

The world class L’Auberge du Vieux Puis, which I think can be loosely translated as the Inn of old powers – is hidden away in the unassuming village of Fontjoncouse with a mere 150 souls at the end of a beautiful, winding mountain road in the Languedoc region of France.

Since retirement, my parents spend most of their time eating and drinking wine in this beautiful part of France where they seem to have discovered their second wind and an almost indecent lust for life.

The restaurant is the pride and joy of chef Gilles Goujon, with whom I managed to sneak a photograph on my mobile phone to my husband’s embarrassment. 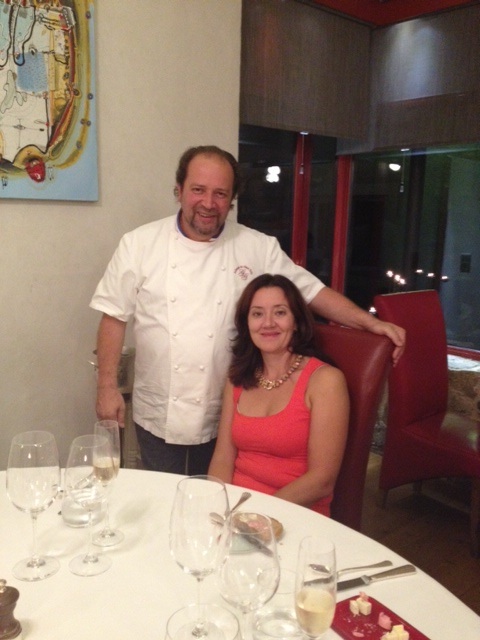 The restaurant is a delightful blend of old and new with a historic well in the front garden contrasted with sleek, contemporary lines, modern glass floor panels showcasing historic foundations and a selection of quirky artwork, including iron sculptures produced by an eccentric local artist.

Tip: Don’t forget your mobile phone for photographs, but try to be subtle so as not to alert the staff and other diners to the fact that you’re blown away

The crisp white linen tablecloth is covered with an array of cutlery (no plastic in sight) hinting at the number of courses to come.

My tummy does a little flip flop as it begins to grasp the enormity of what awaits.

My father selects an un-pronounceable local white wine, the first of many bottles to come, in a totally different class and budget to my daily Chardonnay.

Tip: Try not to think about the pair of shoes you could have bought for the same price as the dish you’re about to consume, as it is bound to sour the taste.

To warm up our taste buds, we are presented with a selection of foreign-looking delicacies on a long wooden platter, accompanied by detailed descriptions from a waiter in perfect English.

The offerings include a bread ball that releases an explosion of wild mushroom juice into your mouth upon first bite, a second bread ball infused with liquid tomato, a mushroom tartelette and a fragile-looking mini squid pancake.  Every bite is sheer heaven!

Tip: Don’t ignore the waiter’s instructions. My husband, who usually tries to go against the stream, approached his plate from right to left instead of left to right, which meant the squid dominated the palate. 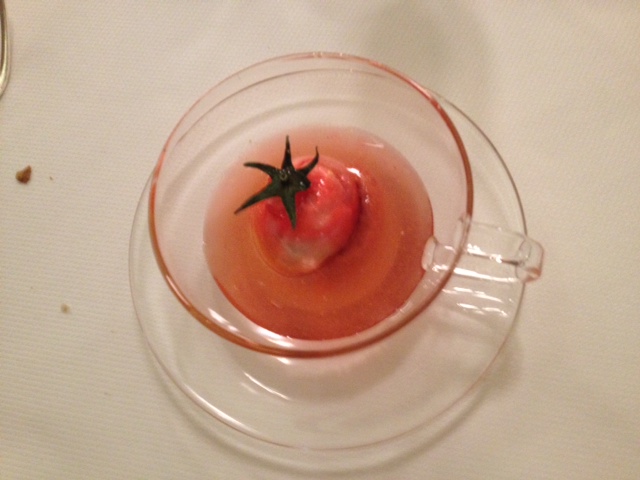 Amuse bouche – tomato in a gazpacho

The pleasant little interlude consists of a pretty ball of tomato sorbet with buffalo mozzarella cheese interior and encrusted in sugar, floating in gazpacho water.

By now the wine and conversation are flowing and my taste buds are dazed and dizzy with excitement, wondering what had hit them.

My mouth literally hangs open as the waiter describes the entrée: A single king prawn entrapped in a delicate cage made of potato and squid ink on a bed of tomato and vegetable pasta, accompanied by another bread ball (clearly a Chef’s favourite) infused with the juice from the head of the king prawn and aside a clam filled with potato and chorizo paste.  My taste buds are in ecstasy. 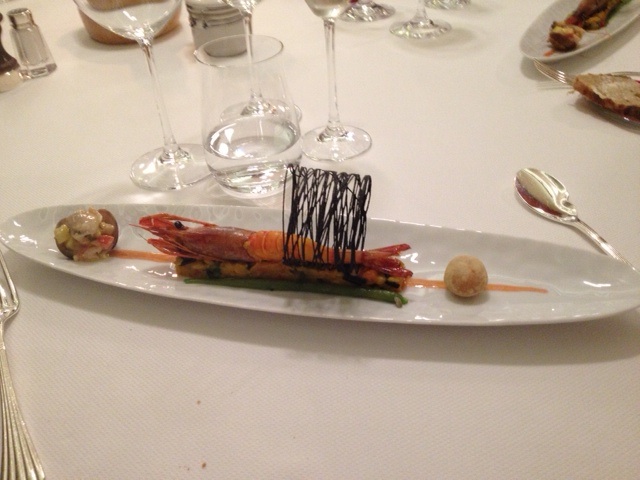 The portions, though not small, are surprisingly light so I’m not as stuffed as I would expect to be at this stage and the next dish – I can’t remember what it’s called and I’m past caring – doesn’t disappoint:

Sea bass cooked in a Spanish carbon oven with roasted fennel seeds, baby octopus and cucumber of the sea on the side. 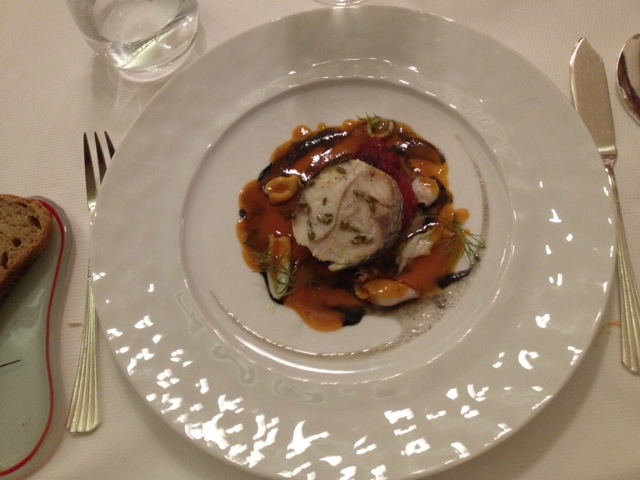 Sea bass with cucumber of the sea

And now, for the piéce de resistance – the main course: Roasted pigeon! 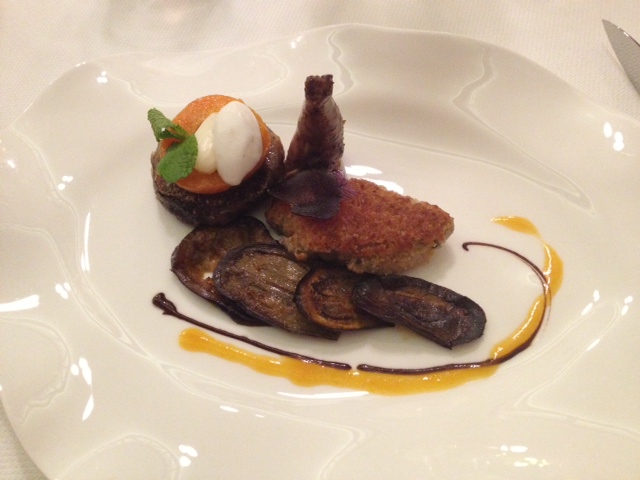 I must admit when my dad told me earlier what to expect, I did experience a flickering of doubt. I’m not exactly a fussy eater and apart from liver and frog legs draped suggestively over a bowl once in a pretentious French restaurant in Cape Town, I can’t think of anything I won’t eat.

The pigeon – much like a chicken thigh – roasted in almond milk and accompanied by a roasted apricot on roasted fig, topped with mint and with roasted aubergine slices on the side, look and sound beautiful.

But the thought of the fat pigeons on our lawn back home and a taste strongly reminiscent of liver cause mutiny among my taste buds and I send the plate back with the pigeon barely touched.

Tip: Do not try to explain to the head waiter in a Michelin restaurant that the main course is not “quite your taste.” The hawk-nosed Frenchman looked incredulous and stomped off shaking his head in disgust at the sound of such un-culturedness. 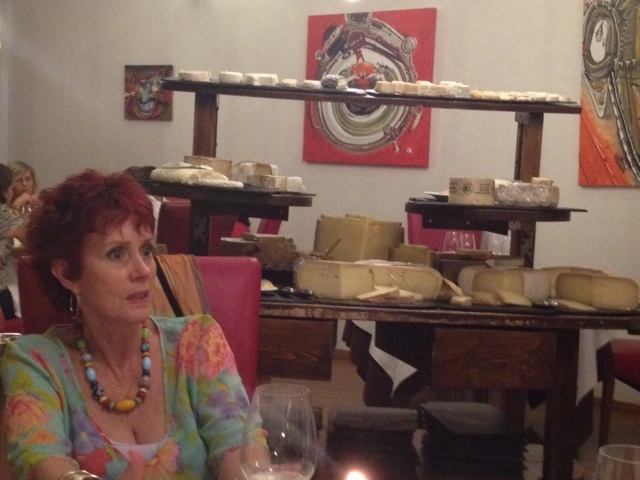 I know the French like their cheese, but I wasn’t expecting this. A three-tiered trolley laden with enough cheese to fill the English channel is wheeled to the table by a young waiter, who gives us a lecture about the origin, vintage, pedigree, etc of the selection on offer.

I suspect the waiter has been tipped off by the head waiter to approach me first for a good laugh, because when he asks Madame what she would like before anyone else – my mind goes blank.

Eventually, I plump for goat’s cheese – spicy and creamy with quince marmalade, feeling like I’d just flunked another important test, but the taste is so good, I couldn’t care less. 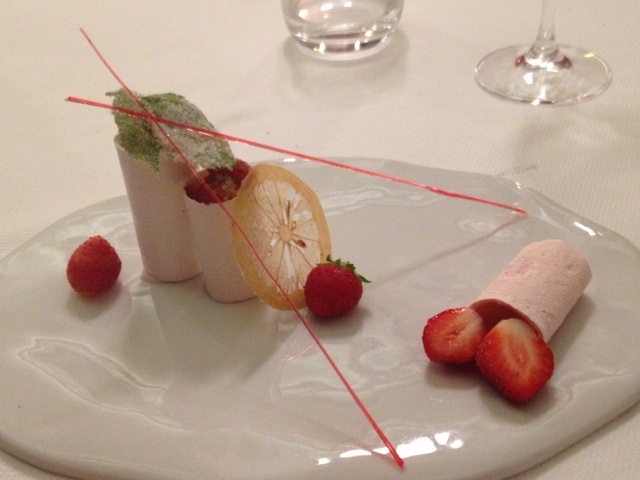 Always my favourite item on a menu – the dessert: strawberry and lemon sorbet swimming in strawberry Chantilly cream and surrounded by meringue sugar strands does not disappoint.

I also lust after my dad’s chocolate cherry maccarron with salted caramel.

Finally, we are presented with a little black box with a selection of handmade chocolates  – which we can’t finish despite our best attempts and so ends my first (and probably last) Michelin experience on a high note. 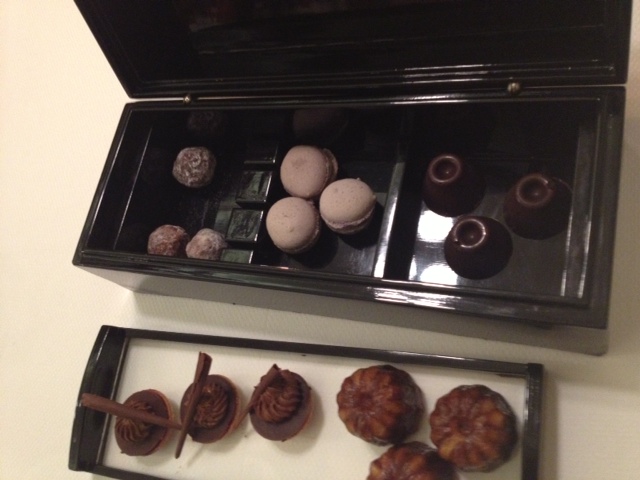 Too stuffed for chocolate!

Tip: When you go to the bathroom, don’t worry about finding your way. Every time I got up from the table, I was led straight into the ladies by a sea of attentive waiters, who stopped short of offering to wipe my bum.

Have you ever eaten in a Michelin-starred restaurant – what did you think?