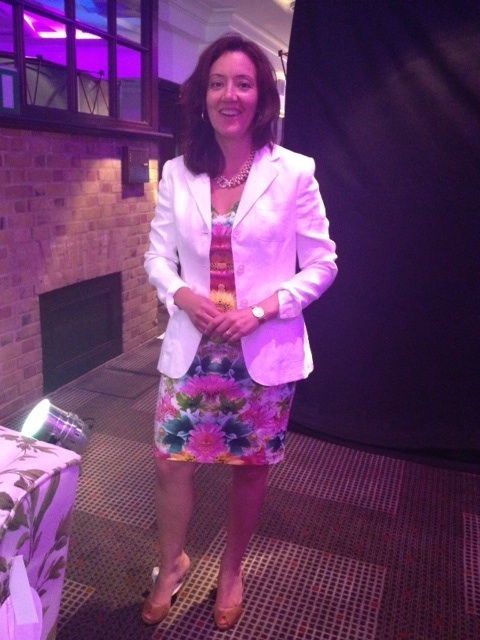 Dressed to kill: Me in my Wimbledon outfit

Every now and then my husband does something that blows me away. It doesn’t happen often and it usually is a pure stroke of luck that required no planning or effort on his part, but I take what I can get.

He chose his moment carefully, waiting for me to be particularly annoyed with him for turning a blind eye to the overflowing rubbish bin spewing deadly fumes around the kitchen and feeding our children their own bodyweight in junk food.

“By the way, I’ve got tickets to Wimbledon.” Deadpan delivery. No emotion, no excitement – Germans don’t do excitement in my experience – as if this was as much part of our daily routine as the school run. (He won the tickets in a work lottery, but he only revealed this much later after I’d sufficiently swooned at his feet)

“Wimbledon! WOW!” I was beside myself. Jumping up and down and screaming  “Oh YEAH!” so loudly the grumpy old lady next door slammed her window shut.

And as it turns out, not only are we going to Wimbledon, we are going ‘corporate’ on Centre Court and we will be picked up by a chauffeur from home! This is seriously unlike us – we don’t do style. Our idea of style is shouting abuse at each other while repacking suitcases in full public view in airport halls because my curling tongs had caused the suitcase to tip the scales over the limit.

Once the excitement subsided, I had my first little panic attack – “OMG! What am I going to wear?”I knew straightaway that nothing in my wardrobe would live up to this occasion. What do you wear to Wimbledon if you don’t quite look like Maria Sharapova and your budget can just about stretch to the odd supermarket T-shirt sneaked in during the grocery shop?

I was actually getting myself into quite a state about this, when I happened to stumble across a free personal styling session by the lovely Kate Battrick @TwistedSkirt, a personal stylist employed by TK MAXX for the day at a conference I went to.On the impulse I thought I’d mention to her that I’m going to Wimbledon and had no idea what to wear.

Kate‘s face lit up as if she’d been waiting for exactly this challenge all day: How to turn a mousy, frumpy mum-of-three into a Centre Court sensation. She took one look at me and dismissed my toga-like top, especially chosen by me to hide the after-effects of two large glasses of Chardonnay every night.

“This is exactly the wrong outfit for your ‘hourglass’ figure,” she said.

I almost kissed her.  No one had ever mentioned the word hourglass in relation to my figure and I was expecting the more familiar – heavy bottomed pear shape – so, I was willing to hear her out.

“You need to accentuate your waist,” she said, pointing to a rather garish, tight floral dress with an open back – the kind much more suited to the Sharapovas of this world.

I was beginning to worry about the lighting in the room, because if she thought I had a waist, never mind one that had to be accentuated, her eyesight must be worse than mine and I’d had a retinal detachment in one eye.

Dressing on a budget

To cut a long story short, she made me try on the dress – it was a size 10 (US-sizes) of course – I’ve been nowhere near a size ten since having my first child.

But believe it or not, the dress fit me and looked amazing (everything is relative of course, as my husband would say). It created a waist and the floral print made me look fashionable and dare I say- younger than my tender 43 years.

I knew I had to have the dress. My mind was working overtime trying to figure out how I would be able to afford the dress and whether I could wear it with flip-flops as I certainly had no matching footwear and would not be able to fork out on a pair of shoes too.

That was when she announced the price:  £20!

My jaw dropped to the floor. Not only would I never have tried this dress had it not been for the stylist, but I would not have dreamed that I could actually afford it without cancelling our summer holiday. Next, Kate advised me to buy a pair of almond court shoes for £49 from M&S and combine the dress with a white linen jacket, which luckily, I already owned.

My husband usually doesn’t get involved in what I wear, apart from telling me I didn’t need it – So, I was chuffed when he LOVED the dress – and that was BEFORE I told him the price.

So, I’m off to Wimbledon with my head held high. My shoes might just cut off all circulation to my little toes by the end of the day, but my flip-flops are in the bag, just in case.  No idea who I’m going to be watching, but if you’re watching telly – I’ll be the woman in the bright floral dress waving madly every time the camera points in my direction. I might even stand up and do a little twirl to show off the back of the dress.