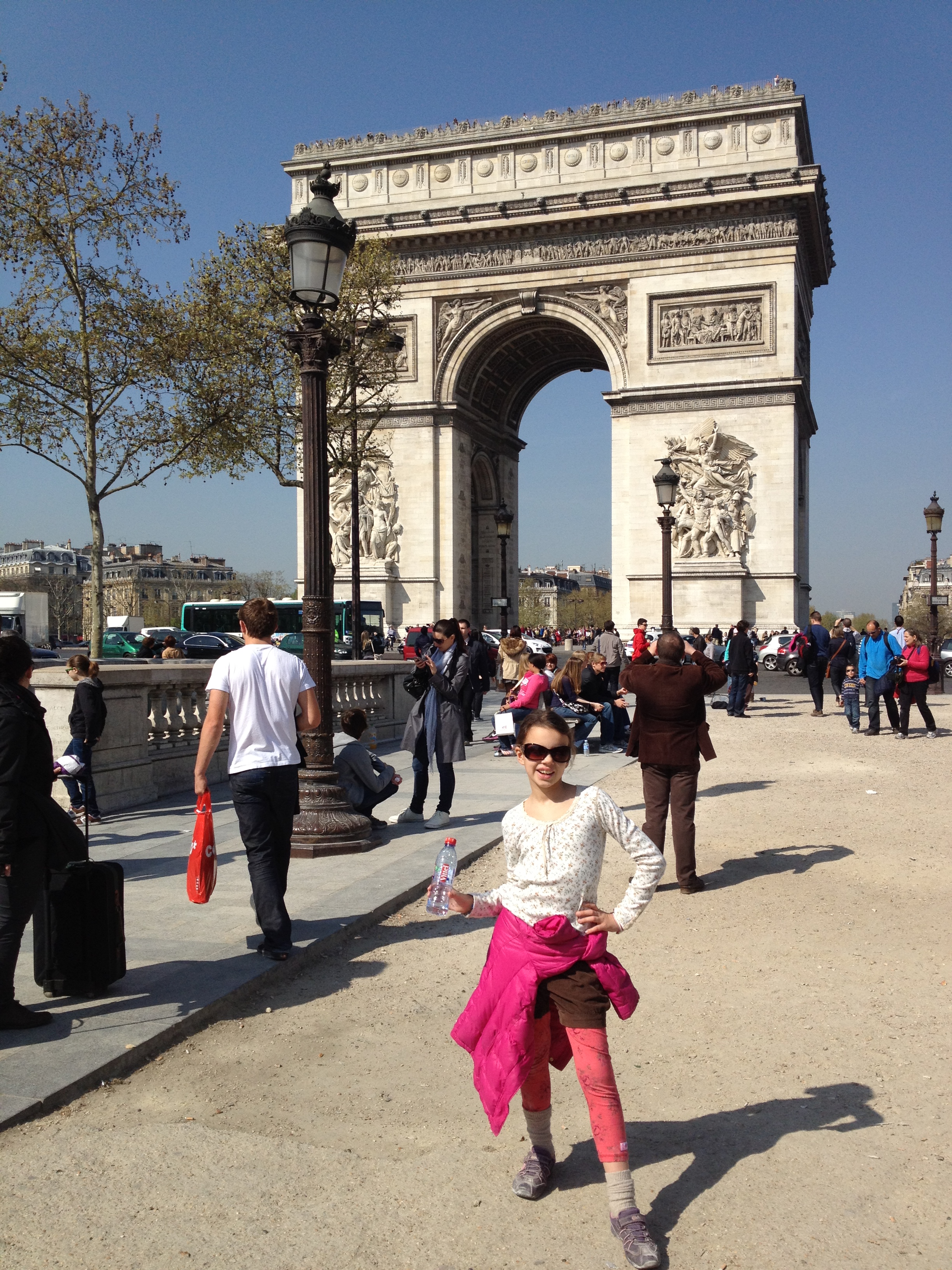 Paula poses in front of the Arc de Triomphe, near where we used to live

This post forms part of a series about my trip to Paris with my daughter Paula. We revisited the city for her 10th birthday as we lived there during the first two years of her life. To read from the beginning, click here.

There’s already a queue at the bustling local boulanger at 7.30am, but we persevere and leave happily clutching our rustling white paper bag with a still warm almond croissant and pain au chocolat a few minutes later.

We leave a trail of flaky crumbs in our wake on our way to the metro, eating and planning our route to Neuilly-sur-Seine, our first stop of the day.

The subdued suburb was the first area we lived in during our two-year sojourn in the City of Light and we shared our elitist address with no less than former French president Nicolas Sarkozy and a sea of grey-haired, silk-scarved aristocrats.

As an insecure, first-time mother, it was a time of having every rug under my feet pulled out with such force that a part of me prefers to blot out memories of feeling constantly out of depth in turbulent emotional waters.

But these are not thoughts I want to share with my 10-year-old daughter. I want to open a memory bank of the beautiful moments we had in-between – some unsuspected and some only fully appreciated once they were long gone.

Neuilly, although rather snobbish and unwelcoming, was close to my husband’s job, as well as a tranquil and beautiful corner of the Bois de Bologne, vast parklands filled with lunchtime joggers and cyclists by day, but with an unsavoury reputation as the city’s cruising headquarters at night.

When eventually I’d recovered from the shock of giving birth and changing countries over a period of 14 days, we braved the five-minute walk to the woods most mornings. Paula giggles as I recall the many times I rushed back at breakneck speed to breastfeed a screaming, red-faced infant in the privacy of our apartment.

Parisian mums don’t breastfeed – and those who do certainly don’t do so in public. Big, veined boobs popping out of maternity tops don’t really feature on the Parisian café scene.

As I grew more adventurous, we moved further afield, crossing the deafening traffic of Charles de Gaulle high street en route to our local Monoprix. This ubiquitous supermarket is France’s answer to Tesco but with a French flair that stretches to deliciously ripe cheeses, freshly baked croissants and baguettes, stylish accessories and children’s clothes you’d be hard pressed to find on a Tesco shelf.

Picnic at our favourite hang-out 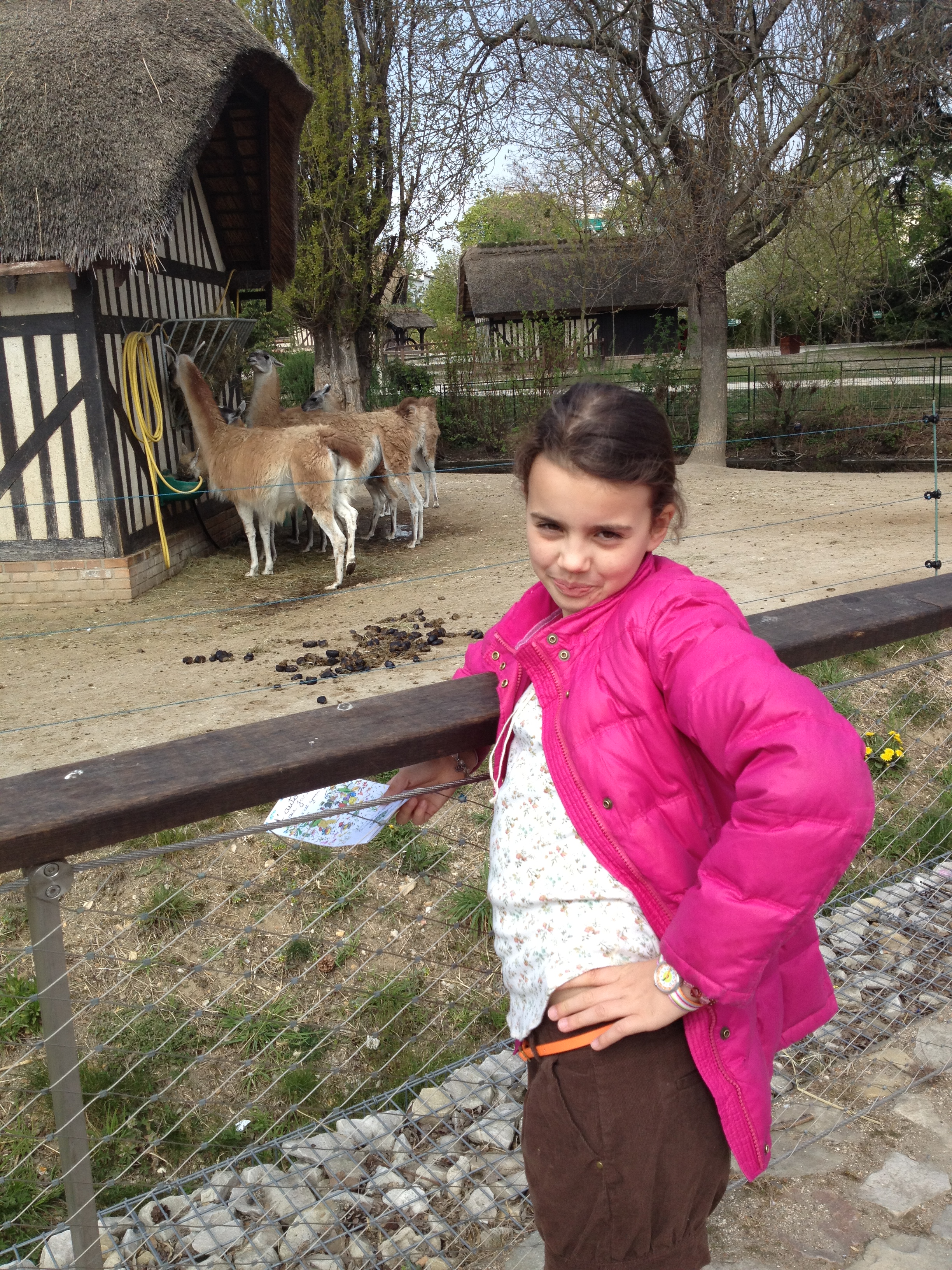 Paula used to love the llamas when she was a toddler.

Today, we choose a Moroccan couscous salad, baguette, camembert, strawberries and a selection of pretty pastel macarons from the deli counter for our planned picnic in the Jardin d’Acclimatation, a wonderfully retro amusement park near our old apartment, where Paula and I spent many mornings together.

One of the city’s top family attractions in summer, the park is all but deserted on this early Spring day, apart from a few workers lazily painting the fences and a smattering of Filipino nannies with their excited charges.

We stroll around, rediscovering long forgotten favourite haunts, including la Petite Ferme with turkeys, pigs, sheep, donkeys and the llamas, which fascinated the toddler Paula to the point of near obsession.

A princess:  now and then 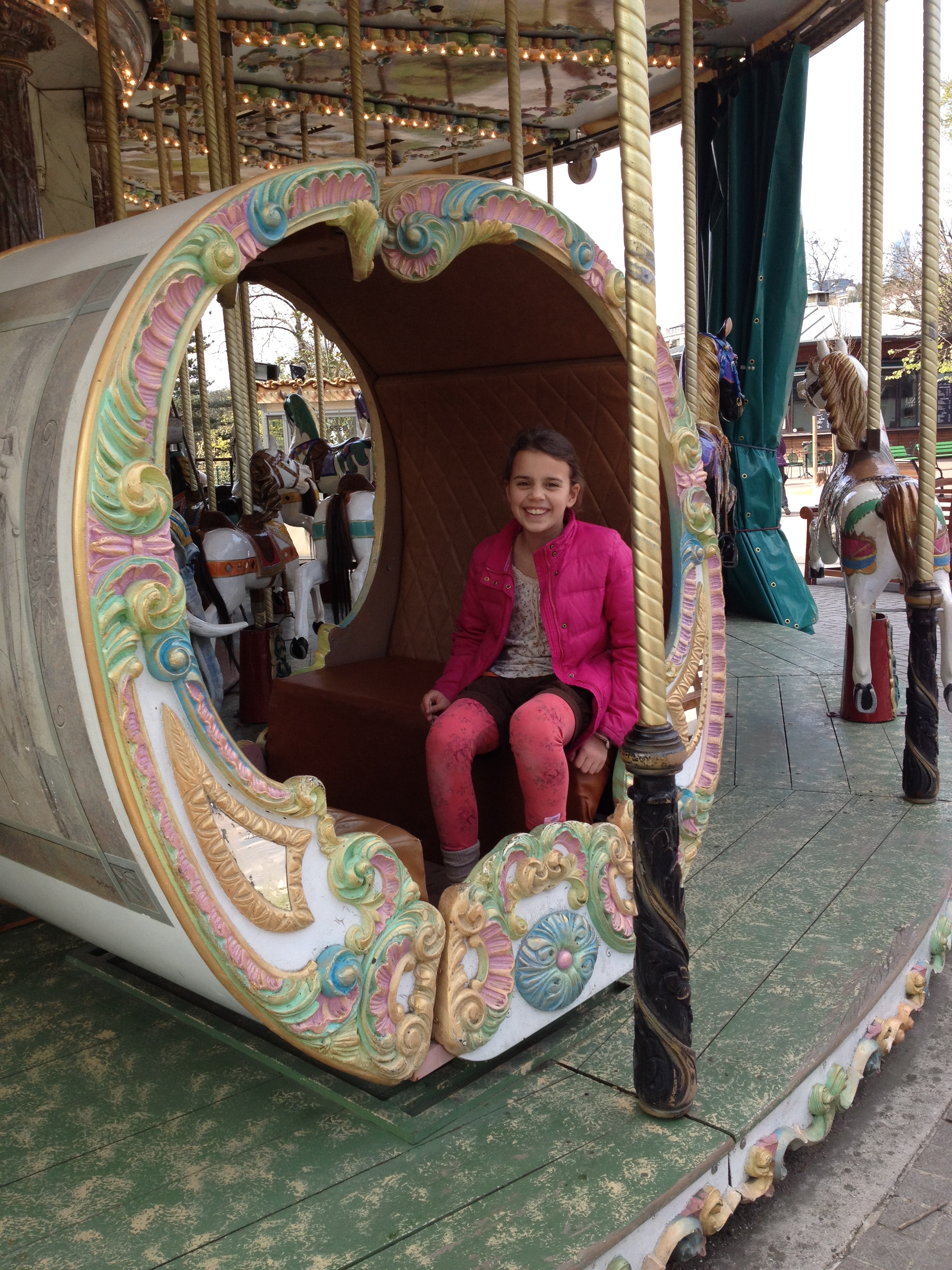 Carousel in the Jardin d’ Acclimatation

I take a photo of my beautiful girl in a gilded carriage on the vintage carousel, to add to a collection of earlier photographs of her in the same spot.

The camera hides an unexpected onslaught of tears as the picture brings into sharp focus my memory of a tiny little princess nearly 10 years ago waving excitedly at onlookers as if she had the whole world at her feet. 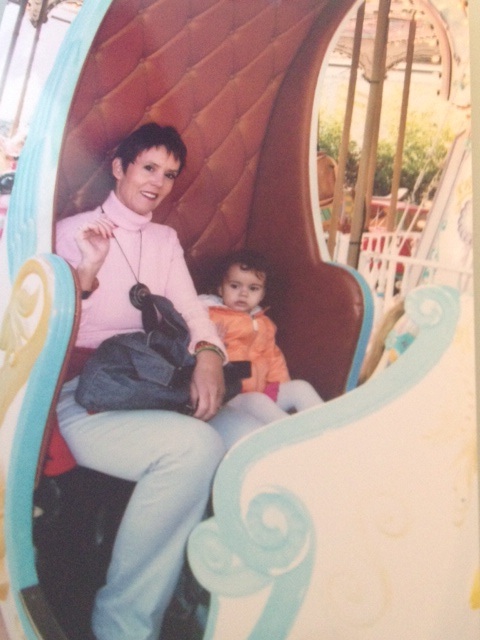 Paula with her grandma Laurita on the carousel Lunch in Paris on our first day

This time last year my daughter Paula and I travelled to Paris for her 10th birthday for a weekend.

It was a gift that would provide us both with an endless supply of memories – the kind that form the life support of a mother-daughter relationship.

Paris was the obvious choice for what I hope will be the first of many travels with my daughter because it was where Paula spent the first two years of her life. We moved to Paris from the UK when she was only 10 days old.

As we queued excitedly to board the Eurostar with hundreds of other tourists in the early hours of the morning, I was reminded of a nerve-wrecking trip 10 years ago, when my husband and I transported our fragile, crying little bundle across the channel, guarding over her like hawks.

This time the journey was much more relaxed. Paula and I fine-tuned our itinerary over coffee and hot chocolate, chatting and giggling non-stop.

Our list of must-sees included obvious tourist sites she’d been learning about such as Arc de Triumph and Eiffel Tower, as well as the more obscure haunts of an expat mum determined to enjoy her beautiful baby girl in spite of hostile Parisians and a lack of French.

She had no idea how terrified I was

As Gare du Nord was announced over the speaker system, my stomach tensed.  Could I do this? Could I really travel alone in Paris with a young child? Everyone knew I was completely directionless and hopeless at reading maps. How would I find anything without my husband – or a man by my side? My mind seemed to be erasing every French word I ever learned, rendering me helpless.

I looked down at my little girl, who was positively beaming – loving every minute of precious time alone with the mum she usually had to share with two younger brothers. She had no idea how terrified I was.

And so, I gathered our suitcases and coats and with it my courage. We got off, negotiated our way around the Paris Metro to our hotel near Notre Dame with little effort as if this was what we did every day of our lives.

After a short stop at the modest hotel to deposit our bags and in my case refresh my face, while Paula inspected every inch of the room and arranged her giraffe soft toy on the bed, we hit the Parisian streets in search of something typically French for our dejeuner.

We took our seats among office workers on lunch and map-reading tourists on the pavement outside a café. The chairs faced the busy square allowing us to observe the noisy and animated street spectacle over our Croque Monsieur and frites.

And so our adventure began…

PS. If you like what you’re reading, please consider nominating me for a BIB award (see badges alongside this post to find out more) –  I can’t afford to pay you, but you’ll make my day…