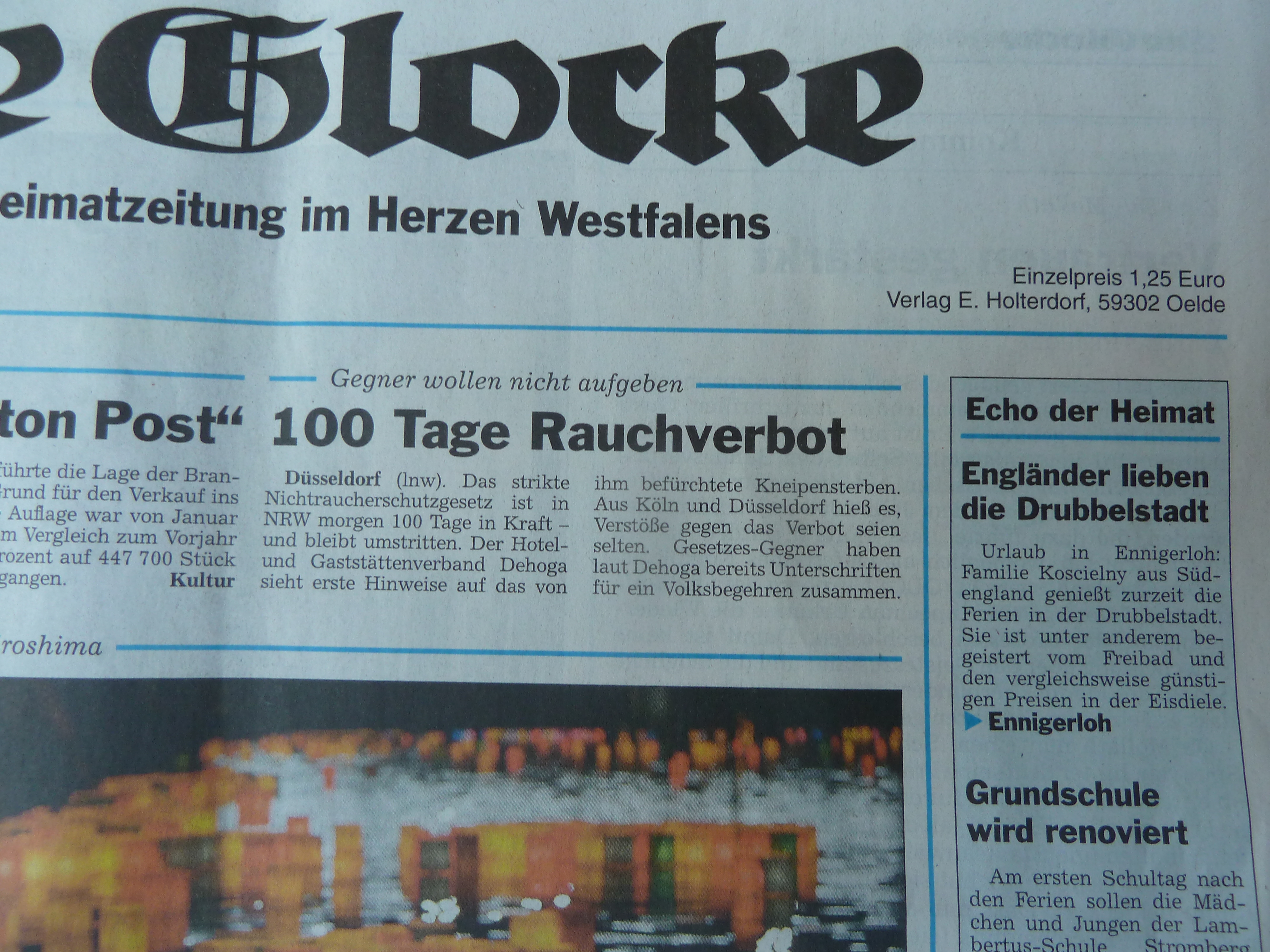 Die Glocke in Ennigerloh – we are front page news

So, we didn’t exactly plan to make the front page in Germany, but a chance meeting with a young reporter and a quick chat about my blog and our holiday have catapulted us into the limelight in the country of my husband’s birth.

As you should know from my previous post – we spent a few days with my in-laws in Ennigerloh – a town in Munsterland, Germany, best known for cement factories, which also happens to be my husband’s hometown.

What is a mummy blog?

While we were enjoying a friendly water polo match in the Freibad – public pool – I got chatting to Elisa Berste, a student and freelance reporter for Die Glocke – a daily paper in the area.

I told her about my blog and that I will be writing about our experience there. She didn’t seem too sure about what a mummy blog was, but her editor obviously did and she emailed to ask if she could interview us.

The article – which was promoted on the front page and then carried inside the paper with a photograph of our family, including my in-laws – has apparently hit the little German town like a bomb – in a positive sense. It was even discussed at a local political meeting and seems to be the best PR the little Cinderella town has ever had.

So, what made us so newsworthy?

We raved about the town’s facilities for families – an amazing public swimming pool, a Venetian ice cream cafe, family cycling routes, amazing playgrounds and very affordable meals out: £4 per large pizza in an upmarket pizzeria.

The open countryside, friendly locals and the fact that local children seem to play outside and roam by themselves also impressed us.
German children start school only at the age of 6 and there seems to be less pressure on them to perform academically and to have a planned activity scheduled for most days of the week, the kind of competitive parenting you can’t help but getting sucked into when you live in certain parts of England such as Buckinghamshire.

The reporter did get a few minor facts wrong – probably lost in translation between her English and my German, but the themes of discussion of freedom, affordability and a society which seem to prioritise the freedom and quality of life of families came across very well.

As a bonus visits to my blog have skyrocketed since the publication of the article in Germany.
Just awaiting a call from German Chancellor Angela Merkel – who knows maybe she can give David Cameron and Nick Clegg some tips on how to look after families! 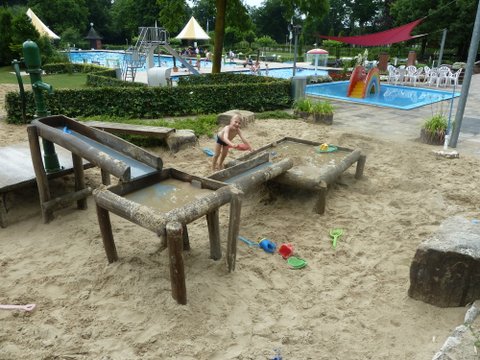 I´m typing this post on a German keyboard which annozinglz swaps the y and z, so bear with me till I get the hang of it.

This summer holidaz report is brought to you, not from mz deckchair on the beach in the Caribbean, but seated amidst stuffed animals, and plastic pot plants in a black leather armchair in my father-in-law´s study.

We are spending the first few days of our summer break in a forgotten little outpost in Northern Germany called Ennigerloh, where my husband spent the first 18 years of his life (which explains quite a lot.)

The little village in Munsterland best known for its gigantic cement factory, does not feature on Tripadvisor as a sought after holiday destination (in fact it doesn´t feature at all – surprisingly…) so I wasn´t exactly counting the days.

Holiday is a state of mind

But a friend once told me that a holiday is a state of mind and has nothing to do with the destination, so I was determined to see a different side of Ennigerloh this time.  And, believe it or not, the little Cinderella town has seduced us with its charms over the past few days.

The fact that we find ourselves in the midst of a stifling heat wave perforated by the odd spectacular thunderstorm means we´re spending a lot of time at the Freibad.  The open air public swimming pool, of which almost every German town boasts one, puts our drab leisure centre pools to shame.

The Freibad – almost every village has one – which costs 2 pounds (can´t find pound sign on this computer) to enter, is as close to a children´s paradise as you can get.  My older two spend hours jumping from the 5m, 3m and 1m diving boards into the sparkling Olympic-sized pool in Oelde, a neighbouring town. I even managed the 3m jump after holding up the queue of German children for 20 minutes to much ridicule from my husband and hysterics from my children.

Max, 4, meanwhile has two smaller pools with sprinklers and slides to choose from. Luscious lawns and huge trees surround the pools with (towel-free) deck chairs and picnic spots as far as the eye can see. (Obviously the Germans are more chilled about deck chairs at home than when they are on holiday) 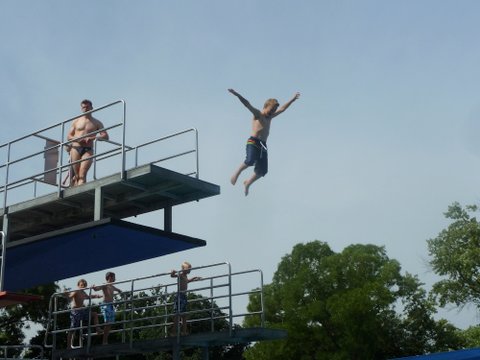 Lukas, 9, flying through the air from a 5m diving board in Germany 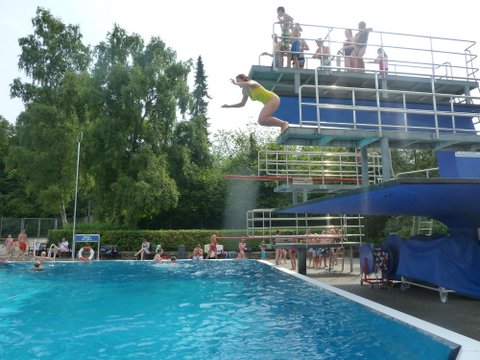 Me leaping off 3m diving board – watch out Tom Daley

The children took part in an organised water polo tournament with local children and soon started shouting to team mates in German after realising that was the only way to get their hands on the ball. The game took quite a serious turn after the dads, including my aggressively competitive husband, joined in.

A young reporter from the local newspaper: Die Glocke was on standby to photograph the holiday fun, so my husband (who can´t resist a bit of limelight) and children may have made the news in his hometown.

A stretch of sand dotted with beach baskets – as they´re called in German – wooden two-man seats with canvas awning overhead and footrest, an invitation for stressed-out parent souls to relax while the children get to grips with a variety of water pumps and wheels. A permanent outdoor table tennis table and giant chess board and squeaky clean changing rooms and showers make this one of the best pools I´ve ever been to.

Famished after several hours in the water, we hit the Venetian Eiskafe – an Italian ice-cream parlour distinctly out of place in the industrial heartland of Germany – for generous plates of spaghetti eis: spaghetti-shaped ice-cream drizzled with strawberry sauce and topped with smarties. I enjoy a cream-laced iced coffee with enough calories to last me until Christmas. 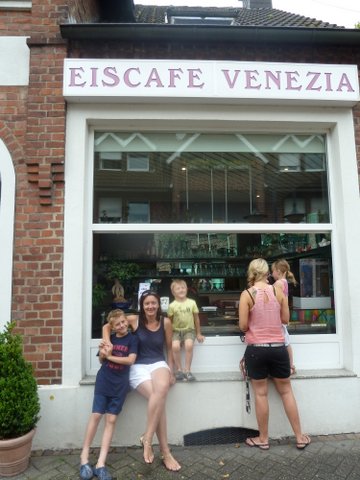 Eiscafe Venezia in Germany – might as well be in Italy 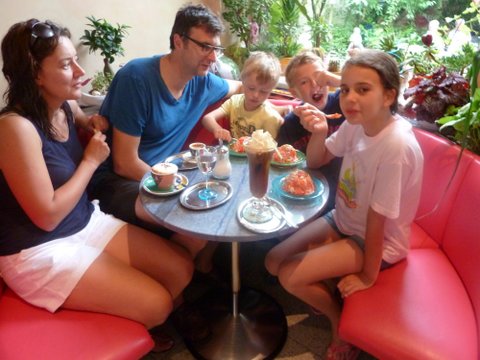 German children are well-catered for – the playgrounds are creative masterpieces, testament to imagination that the nation is not usually credited for.  Drawbridges, towers and castles with twisted slides and tunnels can be found in every village.

Unlike at home, where we are too scared to venture out on our bicycles as a family, Germany is a cyclist´s paradise. Cycle routes and lane criss-cross the town and take you across acres of stretched out rural fields under glorious open skies. Everyone aged between 4 and 94 uses this as a mode of transport and I can vouch for its safety, even after a few glasses of Schnapps.

My husband and I cycled 10kms to a restaurant in a nearby village overlooking a lake, for a cocktail evening that could almost compete in terms of food, music and location with a Manhattan hotspot, if you ignore the local farmgirl out on the town dresscode and the perennial stereotype of socks with Birkenstock sandals, favourited by hardcore Germans. Tonight the plan is to cycle to a nearby beer garden for more Weiz-bier, a refreshing beer served with lemon slices.

After three days, I feel more relaxed than if I´d spent a week in Majorca. Whoever said Germans don´t know how to have fun?

How are you spending the first days of the summer holidays? Have you ever considered Germany for a family holiday? What were your impressions?