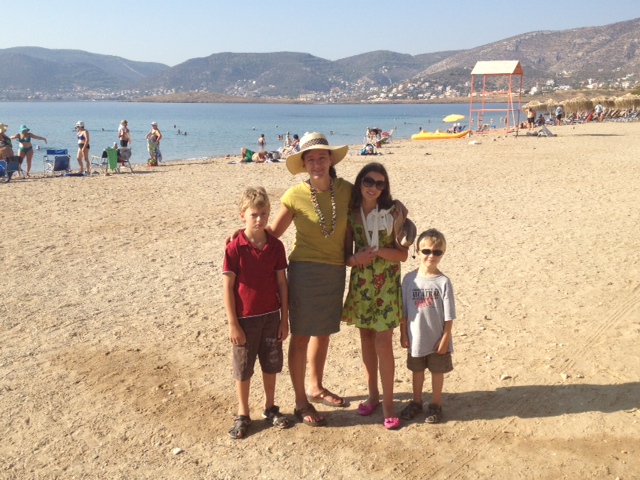 On the beach in Porto Rafti

PIcture the Greek island in the Mama-Mia movie – you know the one – with crystal waters, hills covered in crisp white buildings teeming with straw-hatted tourists.

Now wipe this image from your mind completely and imagine a very different Greece, a protected little bay on the mainland, which doesn’t have quite the postcard wow-factor of Mykonos or Santorini but which makes up for it a thousand times with glimpses of real Greek culture.

Where the Athenians go

“Porto Rafti is where the Athenians go on holiday,” my friend Caroline (her of lunchboxworld.co.uk) had told me when she mentioned they would not be using their apartment in Greece this summer.

Fancying myself as the footloose, ‘off-the-beaten-track’ kind of traveller – and at the moment very much a budget traveller, I really liked the sound of this. I’d long ago made peace with the fact that unless I did a Shirley Valentine or won the lottery, I was never going to see Greece in August, so this seemed like an opportunity not to be missed.

On our 20-minute drive from Athens airport, half-finished buildings scarred the landscape confirming the country’s financial woes. It also became clear that Greeks do tacky quite well – judging from the glaring neon signs and shouting posters competing for the attention of drivers-by. 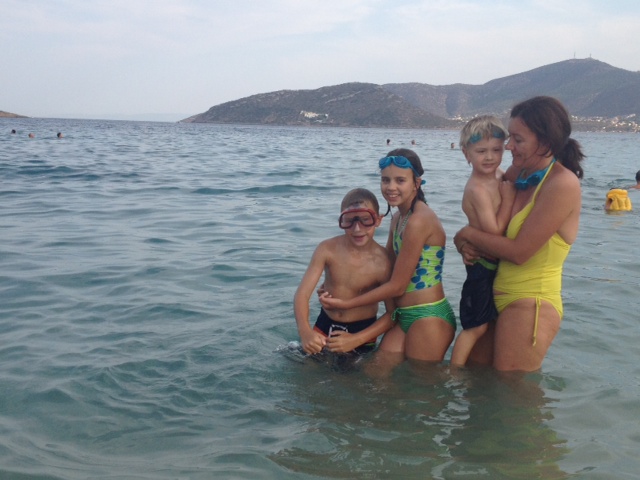 My sagging spirits lifted when the bay of Porto Rafti opened up in front of us in a tranquil late afternoon scene of invitingly clear waters and gently bobbing sailing boats.

An hour later we walked a few 100 metres down to the beach from the apartment to join extended Greek families for a sunset stroll along the promenade and a quick dip in the lukewarm ocean.

Families are big in Greece, in more ways than one. Several generations gather for lingering beachside picnics, chattering loudly and soaking up every last ray of sunshine.  Children are at the heart of every gathering, hunting for crabs in the rock pools with their nets, scootering in and out of the human traffic along the promenade or splashing around in the sea goggle-eyed.  We all loved swimming with goggles observing the sea life underneath, although the soukres or jellyfish that seem to creep up on you and can cause a nasty sting, were quite unnerving.

Not a foreigner in sight

Joining the Greeks in their worshipping of the sun and love of the sea in the almost complete absence of other foreigners, felt like a special privilege.

Skin cancer doesn’t seem to bother them much and everyone, including the 70-year-old ladies who bob up and down in the sea careful not to disturb their weekly blow-dries, is a deep coppery brown. 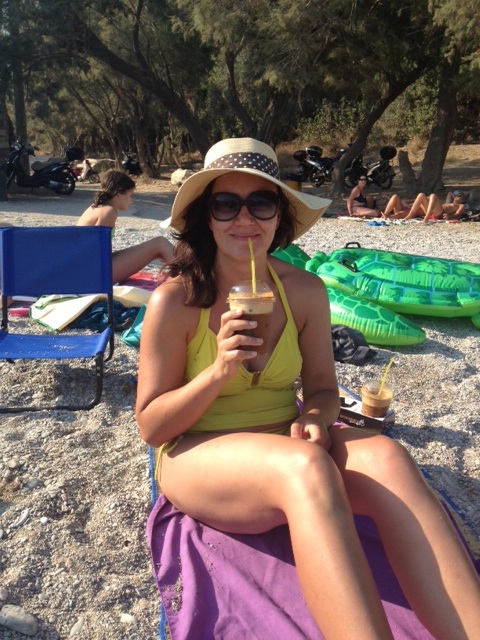 Less obsessed with the body beautiful

The obsession with the body beautiful also seems less pronounced in these parts with fewer gym-toned physiques and a much more healthy spread of gracefully aging, normal flesh on display. Put it this way, I felt relatively comfortable in my costume, which doesn’t happen often.

A different kind of heat

It was August, so it was always going to be hot, but this was a different kind of heat – an oppressive force that slaps you down every time you try to get up and do something  constructive between noon and 5pm. In the end you stop fighting it. You have no choice, but to slow right down and even succumb to the odd Siesta. We found it to be a good time to play a selection of games in my friend’s family-friendly apartment.

After 5pm the port gets its second wind, restaurants start serving frappuccinos, ice cream parlours tempt with fresh flavours and families crawl out of their midday hiding places onto promenades and beaches for a second instalment of sun and sea.

To round off the day, the skies reward you with a spectacular Greek sunset like a changing artwork of watercolour pastels running into each other with dramatic effect.

No English… not a word

I can’t remember when last in my life I’ve been to a place where you can’t get by with English. In most foreign cities people at least understand a few words.

But in Porto Rafti it soon became clear that English was really not spoken, not a word.

As adventurous, intrepid travellers, we loved being surprised when ordering food and trying helplessly to interact with friendly locals – a bit like trying to eat food without cutlery.

However, when my daughter fell down the marble stairs in the apartment block breaking a bone in her shoulder two days before the end of our stay and we needed to find a hospital, this became more of a challenge. 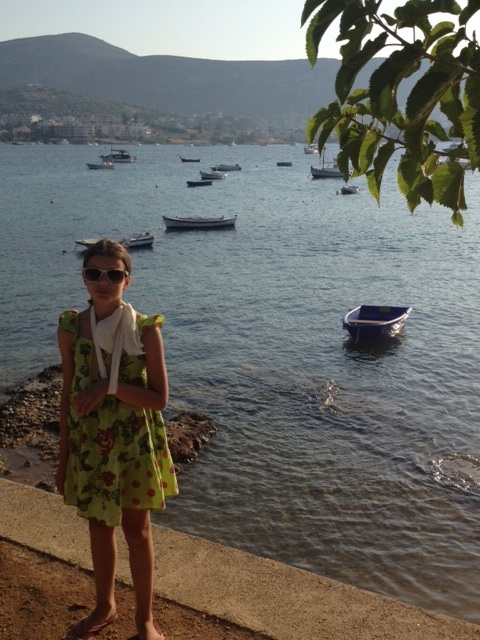 Through a miraculous series of coincidences we were directed via hand gestures, drawings and finally a few words of English from a helpful lady at the tollgate to a big state hospital, where my daughter was seen to within 20 minutes and we paid 6 Euro for an X-ray and a sling. The economy may be crumbling, but the state health service is still going strong.

Greek salads to die for!

Fresh seafood: Lukas with a sardine hanging out his mouth…

Being on a budget, we didn’t eat in expensive restaurants, of which there are a few dotted along the pretty marina on the opposite side of the bay.  However, we did treat ourselves a few times to very reasonable Souvlaki – chicken or pork strips with trimmings in a deliciously doughy pita-bread, as well as fried squid, sardines and arrogant and generous helpings of Greek salad.

For one of our home-cooked meals we bought squid from the weekly food market and fried it in the pan, served with lemon and chunks of fresh bread from the bakery around the corner.  Delicious!

In the
footsteps of civilisation 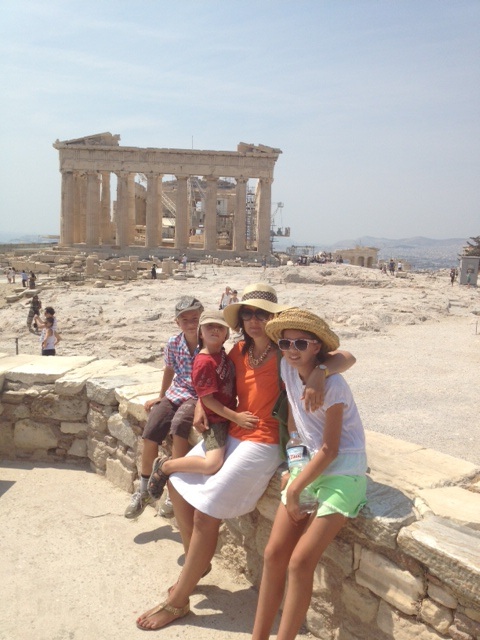 We had great intentions of taking the ferry from the nearby harbour town of Rafina to one of the islands, but in the end we slowed down so much– that all we could muster was a one day-trip to Athens climbing up to the top of the hill of the Akropolis in searing  heat.

We were pushing the limits of the family with this outing, resulting in frayed tempers and tantrums – mainly from my husband – but the realisation that we were walking in the footsteps of civilisation, the impressive columns carved out of marble without the help of modern machinery and breathtaking views of Athens, made it all worthwhile in the end.

I’ve yet to experience the Greek Islands and maybe I’ll be blown away when I do, but Porto Rafti gave us a very different, affordable Greek holiday which felt authentic and most importantly forced us to calm down and relax. 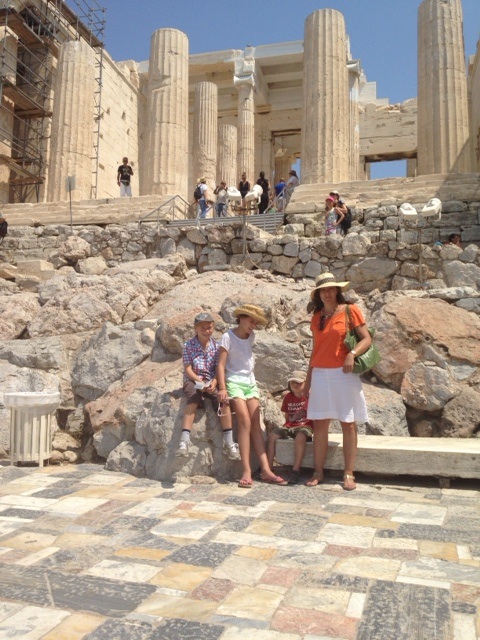 Magnificent marble columns of the Akropolis in Athens

Have you been to Greece? Can you relate to our experience?  What did you think? 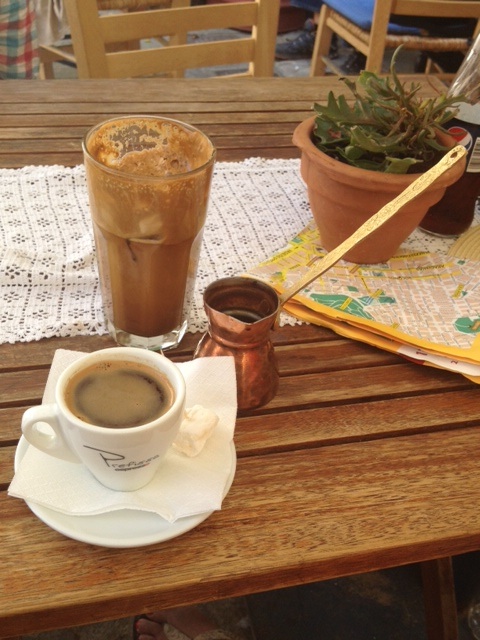