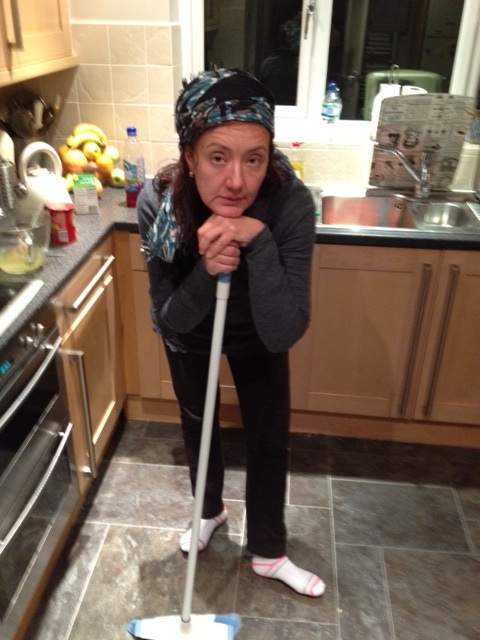 The other day I dropped an earring and it rolled under the bed. When I kneeled down to look for it, I wished I hadn’t.

Unbeknown to me, the forgotten no-mans-land under our bed had turned into a wilderness of dust mites, lost socks, chocolate wrappers, abandoned Happy Meal trinkets and what I suspect was an apple in an advanced state of decomposition.

You would think that this kind of discovery would fulfil any self-respecting housekeeper with enough self-hate and disgust to send her into a frantic fit of hoovering.  In my case you’d be wrong.

The problem with this type of discovery is that I have every reason to suspect it is only the tip of the iceberg.

Once I move the bed to hoover under it, I’d be forced to take a closer look at the life forms in other occupied domestic territories in our home, such as the hinterland behind the sofa, the desert on top of my wardrobe, murky corners of kitchen cabinets and the science project that is the bottom drawer of the fridge.

And if I’m not careful, this kind of unprecedented cleaning could spark a full-scale war against grime or so-called spring clean, which would have devastating consequences for my already dwindling social life and frazzled state-of-mind,

It’s not that I’m lazy – I do the odd spot of cleaning, usually after midnight on a Wednesday or just before the cleaners come on a Friday. Yes, I do have cleaners – and I love them almost as much as my husband, but they’re not stupid – they also know better than to actually move any furniture or go where no self-respecting woman has gone before.

Trying to keep a house with three children and a 40-something male dirt-free is like fighting an out-of-control fire with a water pistol.

Some weeks ago, during a weak moment, I mopped the kitchen floor. Exactly four and a half minutes later, Max, 4, helped himself to a jam tart, spilling half a pack of sugar all over the floor in the process.

Not long after I cleaned that up, his sister poured herself juice and promptly dropped the cup, clearly illustrating once and for all the futility of mopping the floor. It would amount to an act of conscience, at best.

The same logic would apply to wiping grubby finger prints off the walls or windows, fighting the rebel armies of assorted crumbs under the kitchen table, dust balls behind the curtains or venturing into the sticky swamp between the sofa cushions.

There is no point. It would be about as effective as trying to persuade Greek citizens to pay their taxes.

I do admire women who fight on fearlessly, finding time not only for a weekly deep-cleanse, but also to iron and fold kitchen towels, dust off lampshades, wipe skirting boards, install military order in a cutlery drawer or label the spice rack alphabetically.

I admire them, but I pity them. Some even say they find cleaning therapeutic.

Call me superficial, but plucking your eyebrows or picking your nose is more therapeutic and rewarding and there’s more of a sense of achievement too.

My kitchen floor will remain in a state of semi-permanent stickiness and the ecologically sensitive habitats behind our furniture will stay undisturbed for some years to come.

But at least, I get to read the odd few pages of a book, watch the news most nights and manage to squeeze a bit of quality time with my children into the maddening schedule of a (sort of) working mum.

Next time I drop an earring, I will write it off without a second thought and go out to buy a new pair.